On March 27, 1926, Frank (Francis Russell) O’Hara was born in Maryland. He grew up in Massachusetts, and later studied piano at the New England Conservatory in Boston from 1941 to 1944. O’Hara then served in the South Pacific and Japan as a sonarman on the destroyer USS Nicholas during World War II. Following the war, O’Hara studied at Harvard College, where he majored in music and worked on compositions and was deeply influenced by contemporary music, his first love, as well as visual art. Despite his love for music, O’Hara changed his major and left Harvard in 1950 with a degree in English. He then attended graduate school at the University of Michigan, Ann Arbor, and received his MA in 1951.  In 1952, his first volume of poetry, A City Winter, and Other Poems, attracted favorable attention; his essays on painting and sculpture and his reviews for ArtNews were considered brilliant. O’Hara became one of the most distinguished members of the New York School of poets, which also included Ashbery, James Schuyler, and Kenneth Koch. O’Hara’s most original volumes of verse, Meditations in an Emergency (1956) and Lunch Poems (1964), are impromptu lyrics, a jumble of witty talk, journalistic parodies, and surrealist imagery. O’Hara continued working at the Museum of Modern Art throughout his life, curating exhibitions and writing introductions and catalogs for exhibits and tours. On July 25, 1966, while vacationing on Fire Island, Frank O’Hara was killed in a sand buggy accident. He was forty years old. Source 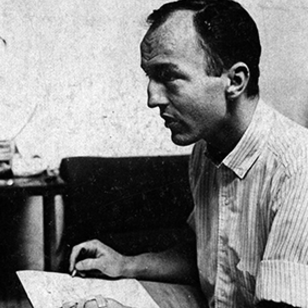