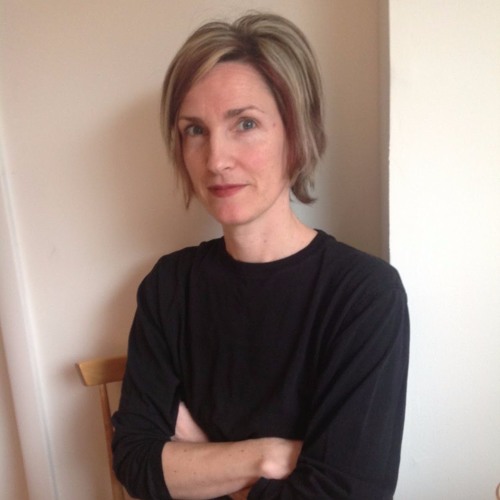 Ailish Hopper is a poet and multidisciplinary artist. She is the author of Dark~Sky Society (New Issues, 2014) and the chapbook Bird in the Head (Center for Book Arts, 2005). She lives in Baltimore. Source

Excerpt from “Did It Ever Occur to You That Maybe You’re Falling in Love?”

We buried the problem.

We planted a tree over the problem.

We regretted our actions toward the problem.

We carved a memorial to the problem, dedicated it. Forgot our handkerchief.

We removed all “unnatural” ingredients, handcrafted a locally-grown tincture for the problem. But nobody bought it.

We freshly-laundered, bleached, deodorized the problem.

We built a wall around the problem, tagged it with pictures of children, birds in trees.

We renamed the problem, and denounced those who used the old name.

We wrote a law for the problem, but it died in committee.

We drove the problem out with loud noises from homemade instruments.

We marched, leafleted, sang hymns, linked arms with the problem, got dragged to jail, got spat on by the problem and let out.

We elected an official who Finally Gets the problem.

We raised an army to corral and question the problem. They went door to door but could never ID.

We created 1-800-Problem, so you could Report On the problem, and 1-900-Problem so you could Be the Only Daddy That Really Turns That problem On.

We drove the wheels offa that problem.

We amplified the problem, turned it on up, and blew it out.

We drank to forget the problem.

We put a title on the problem, took out all the articles, conjunctions, and verbs. Called it “Exprmntl Prblm.”

We shot the problem, and put it out of its misery.

We read daily problem horoscopes. Had our problem palms read by a seer.

We had dreams of the problem. In which we could no longer recognize ourselves.

We reformed. We transformed. Turned over a new leaf. Turned a corner, found ourselves near a scent that somehow reminded us of the problem,

In ways we could never

Put into words. That

That makes it hard to think. That