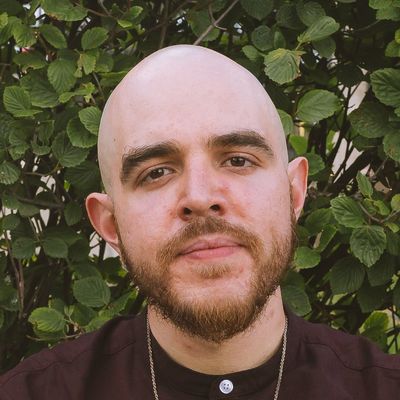 José Olivarez is the son of Mexican immigrants. His debut book of poems, Citizen Illegal, was a finalist for the PEN/ Jean Stein Award and a winner of the 2018 Chicago Review of Books Poetry Prize. It was named a top book of 2018 by The Adroit Journal, NPR, and the New York Public Library. Along with Felicia Chavez and Willie Perdomo, he co-edited the poetry anthology, The BreakBeat Poets Vol. 4: LatiNEXT. He is the co-host of the poetry podcast, The Poetry Gods. In 2018, he was awarded the first annual Author and Artist in Justice Award from the Phillips Brooks House Association and named a Debut Poet of 2018 by Poets & Writers. In 2019, he was awarded a Ruth Lilly and Dorothy Sargent Rosenberg Poetry Fellowship from the Poetry Foundation. His work has been featured in The New York Times, The Paris Review, and elsewhere. Source

poem where no one is deported

into the sock factory where my mom

& her friends worked. it was all women

who worked there. women who braided

each other’s hair during breaks.

had a hair out of place. women who were ready

for cameras or for God, who ended all their sentences

with si dios quiere. as in: the day before

the immigration raid when the rumor

so when the immigration officers arrived

they found boxes of socks & all the women absent.

safe at home. those officers thought

no one was working. they were wrong.

the women would say it was god working.

my mom taught us to fear

& wiped la migra out of this world like a smudge

on a mirror. this god was the god that woke me up

at 7am every day for school to let me know

there was food in the fridge for me & my brothers.

i never asked my mom where the food came from,

but she told me anyway: gracias a dios.

& whispered them into the right ears

to keep our families safe.