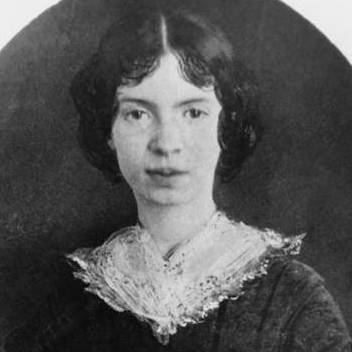 Emily Dickinson is one of America’s greatest and most original poets of all time. She took definition as her province and challenged the existing definitions of poetry and the poet’s work. Like writers such as Ralph Waldo Emerson, Henry David Thoreau, and Walt Whitman, she experimented with expression in order to free it from conventional restraints. Like writers such as Charlotte Brontë and Elizabeth Barrett Browning, she crafted a new type of persona for the first person. The speakers in Dickinson’s poetry, like those in Brontë’s and Browning’s works, are sharp-sighted observers who see the inescapable limitations of their societies as well as their imagined and imaginable escapes. To make the abstract tangible, to define meaning without confining it, to inhabit a house that never became a prison, Dickinson created in her writing a distinctively elliptical language for expressing what was possible but not yet realized. Like the Concord Transcendentalists whose works she knew well, she saw poetry as a double-edged sword. While it liberated the individual, it as readily left him ungrounded. The literary marketplace, however, offered new ground for her work in the last decade of the 19th century. When the first volume of her poetry was published in 1890, four years after her death, it met with stunning success. Going through 11 editions in less than two years, the poems eventually extended far beyond their first household audiences. Dickinson is now known as one of the most important American poets, and her poetry is widely read among people of all ages and interests. Source

“Hope” is the thing with feathers -

That perches in the soul -

And sings the tune without the words -

And sore must be the storm -

That could abash the little Bird

That kept so many warm -

I’ve heard it in the chillest land -

And on the strangest Sea -

Yet - never - in Extremity,

A stanza made of four lines.