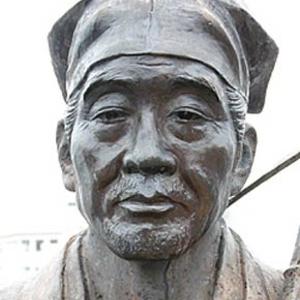 Matsuo Basho, originally Matsuo Chuemon Munefusa, was born in Ueno, Japan, in 1644 to a family of samurai descent. Basho was introduced to poetry at a young age by Todo Yoshitada, for whom he worked and shared a mutual love of renga. After Yoshitada’s death in 1666, Basho moved to the capital city of Edo (now Tokyo), where he studied poetry and gained recognition for his use of the haiku form. In 1684, Basho left Edo to travel alone, and documented his travels in The Narrow Road to the Deep North (1694), which helped establish the haibun as a major form, connecting haiku with narrative prose. He was the author of numerous other anthologies and volumes of poetry, including Monkey's Raincoat (1691) and The Seashell Game (1672). Basho died in Osaka on November 28, 1694. Source

With a sound from the water

Of the frog as it plunges in.

A Japanese poetic form with seventeen syllables, in three lines of five, seven, and five, traditionally evoking images of the natural world.