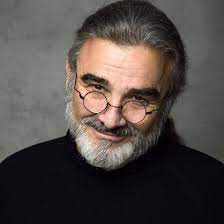 Poet Brod Bagert is the author of over ten books of poetry for children, young adults, and adults. A former lawyer and New Orleans City Councilman, Bagert penned his first poem as a favor to his daughter, who needed a poem to recite in a school program. Bagert realized that few poems written in children’s voices were available, and so wrote one himself. Since then, he has helped change children’s poetry in America, focusing on performance as well as the poem itself.  Bagert’s books of poetry for children include Elephant Games and Other Playful Poems to Perform (1995), and School Fever (2008). His collections for adults include A Bullfrog at Café DuMonde (2008) and Steel Cables (2008). An active presence in schools nationwide, Bagert compares himself to Johnny Appleseed because he journeys across America, planting a love of poetry in children. Source

Eating every plant in sight,

Those nasty worms with legs that crawl

So creepy up the garden wall,

I’d love to squish them with my toe.

But then I see past their disguise,

Someday they’ll all be butterflies.