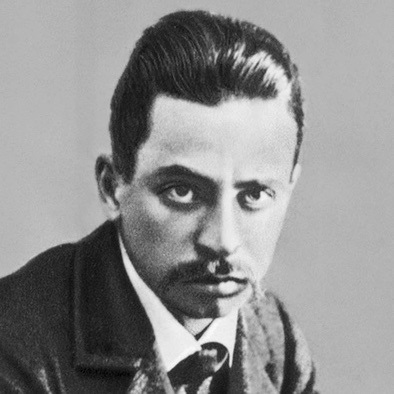 On December 4, 1875, Rainer Maria Rilke was born in Prague. His parents placed him in military school with the desire that he become an officer—a position Rilke was not inclined to hold. By the time he enrolled in Charles University in Prague in 1895, he knew that he would pursue a literary career: he had already published his first volume of poetry, Leben und Lieder, the previous year. At the turn of 1895-1896, Rilke published his second collection, Larenopfer (Sacrifice to the Lares). A third collection, Traumgekrönt (Dream-Crowned) followed in 1896. That same year, Rilke decided to leave the university for Munich, Germany, and later made his first trip to Italy and then Russia, where the young poet met Tolstoy, whose influence is seen in Das Buch vom lieben Gott und anderes (Stories of God). His first great work, Das Stunden Buch (The Book of Hours), was written in Paris in 1905, followed in 1907 by Neue Gedichte (New Poems) and Die Aufzeichnungen des Malte Laurids Brigge (The Notebooks of Malte Laurids Brigge).  When World War I broke out, Rilke was obliged to leave France and during the war he lived in Munich. In 1919, he went to Switzerland where he spent the last years of his life. It was here that he wrote his last two works, the Duino Elegies(1923) and the Sonnets to Orpheus (1923). He died of leukemia on December 29, 1926. At the time of his death his work was intensely admired by many leading European artists, but was almost unknown to the general reading public. His reputation has grown steadily since his death, and he has come to be universally regarded as a master of verse. Source

Do you still remember: falling stars,

how they leapt slantwise through the sky

of our wishes—did we have so many?—

wedded to the swift hazard of their play,

beneath that vast disintegration of their brilliance—

and was whole, as if it would survive them!