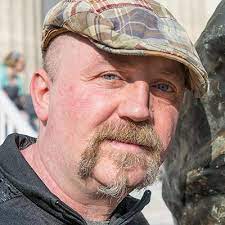 Sean Thomas Dougherty was born in NYC and grew up in Brooklyn NY, Toledo, Ohio and Manchester, NH.  He comes from a diverse family with an African American stepfather and a mother of mixed European descent.  He is the author of 13 books including The Second O of Sorrow (Boa Editions, 2018), All You Ask for is Longing: Poems 1994-2014 (Boa Editions), Scything Grace (2013 Etruscan Press) and Sasha Sings the Laundry on the Line (2010 BOA Editions) which was a finalist for Binghamton University Milton Kessler’s literary prize for the best book by a poet over 40, and his awards include a Fulbright Lectureship to the Balkans, two PA Arts Council Fellowships in Poetry  and an appearance in Best American Poetry 2014.  His latest book from Boa Editions, The Second O of Sorrow, was released in 2018.  Known for his dynamic readings, he has performed at hundreds of venues, universities and festivals including the Detroit Art Festival, the Dodge Poetry Festival, the Old Dominion Literary Festival and across Albania and Macedonia where he appeared on national television, sponsored by the US State Department. Sean is a writing mentor with the MFA program in creative writing at Western Connecticut State University. He lives in Erie Pennsylvania, works as a Med Tech, tours, hustles, and writes poems about stuff that happens in his city between the lake and the highway, and elsewhere, in our wrecked and gloriously ruined and beautiful American lives. Source

Because right now, there is someone

a wound in the exact shape

Poetry written on the page with intentional form to add meaning to the poem.