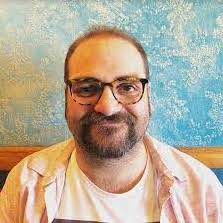 Jeremy Radin is a poet, actor, and teacher. He's appeared on several television shows including It's Always Sunny in Philadelphia, CSI, ER, and Zoey 101, in films such as The Way Back, starring Ben Affleck and directed by Gavin O'Connor, Terrence Malick's The New World and Wrestlemaniac, and in many plays. His poems have appeared in Ploughshares, Crazyhorse, The Colorado Review, The Journal, and elsewhere.  He is the author of two collections of poetry, Slow Dance with Sasquatch (Write Bloody Publishing) and Dear Sal (not a cult press). He lives in Los Angeles. Follow him @germyradin Source

These days I work

up the old, turning

the soil for the new.

This keeps my ghost

to inquire into the silence

that inquires into me.

again, eventually. But not

today—& not up close.

across my absence which

is not quite absence, not

than absence, closer to

ritual, a strategy against

by the goldfinch, I hum

to the dirt, requiring no

forth its gift of rotting,

from this rotting blooms

to be but silent here, amid

the thirsty miracles. Why

I say I'm saying hold me.

the absence of a conjunction (for, and, nor, but, or, yet, so…) between phrases and within a sentence