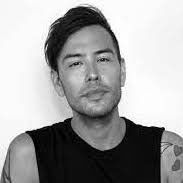 Tommy “Teebs” Pico is a poet, podcaster, and tv writer. He is author of the books IRL, Nature Poem, Junk, Feed, and myriad keen tweets. Originally from the Viejas Indian reservation of the Kumeyaay nation, he now splits his time between Los Angeles and Brooklyn. He co-curates the reading series Poets with Attitude, co-hosts the podcasts Food 4 Thot and Scream, Queen!, is poetry editor at Catapult Magazine, writes on the TV shows Reservation Dogs and Resident Alien, and is a contributing editor at Literary Hub. Source

When a star dies, it becomes any number of things

The early universe of our skin was remarkably smooth

now I stand in a rapidly dampening Christina Aguilera tee

The first stars were born of a gravity, my ancestors—

our sky is really the only thing same for me as it was for them,

which is a pretty stellar inheritance

I don’t know how they made sense of that swell, how they survived long enough to make me, and am sort of at war with sentimentality, generally

but that absence of an answer, yet suggestion of meaning

isn’t ultimately that different from a poem

So I’ve started reading the stars

Nothing is possible until it happens, like digesting sulfur instead of sunlight

or friends with benefits

Poems were my scripture and the poets, my gods

I look up at the poem, all of them up there in the hot sky and fall

into the water, a stone