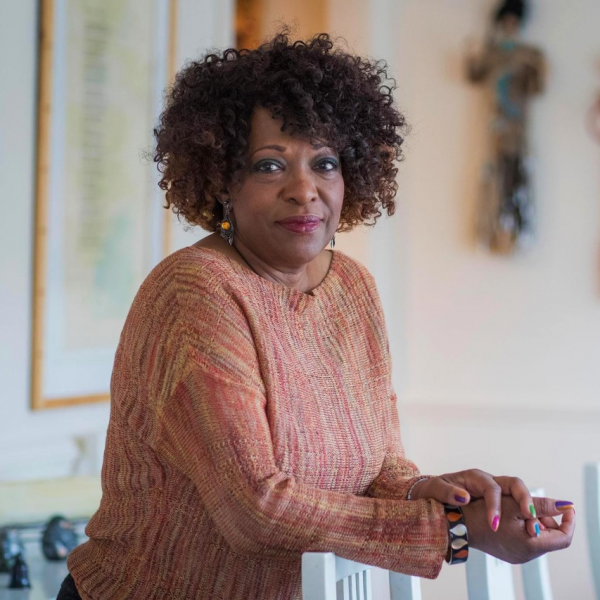 Rita Dove was born in Akron, Ohio, on August 28, 1952. A poet and writer, she was a high school Presidential Scholar and graduated with a BA in English from Miami University of Ohio in 1973. She then studied German poetry as a Fulbright scholar at Universität Tübingen before getting an MFA in Creative Writing from the University of Iowa. Her books of poetry include Collected Poems 1974-2004 (W.W. Norton, 2016), recipient of the 2017 NAACP Image Award, the 2017 Library of Virginia Award and a finalist for the 2016 National Book Award; Sonata Mulattica (W. W. Norton, 2009), winner of the Hurston Wright Legacy Award; On the Bus with Rosa Parks (W. W. Norton, 1999), named a New York Times Notable Book of the Year and a finalist for the National Book Critics Circle Award; and Thomas and Beulah (Carnegie-Mellon University Press, 1986), which won the 1987 Pulitzer Prize for poetry. In addition to poetry, Dove has published a book of short stories, the novel Through the Ivory Gate (Pantheon, 1992), and numerous essays. She also edited The Best American Poetry 2000 (Scribner, 2000), The Penguin Anthology of Twentieth-Century American Poetry (Penguin, 2011), and the New York Times Magazine's weekly poetry column from 2018-2019. Dove served as poet laureate of the United States from 1993 to 1995, and as poet laureate of Virginia from 2004 to 2006. Among her many honors are the 1987 Pulitzer Prize in poetry, the 1996 Heinz Award in the Arts and Humanities, the 2003 Emily Couric Leadership Award, the 2006 Common Wealth Award, the 2007 Chubb Fellowship at Yale University, the 2008 Library of Virginia Lifetime Achievement Award, the 2009 Fulbright Lifetime Achievement Medal, the 2009 International Capri Award, and the 2014 Lifetime Achievement Award from the Furious Flower Poetry Center at James Madison University, the 2019 North Star Award from the Hurston/Wright Foundation, as well as twenty-eight honorary doctorates, among them from Yale University in 2014 and Harvard University in 2018. She is an elected member of the American Academy of Arts and Letters, the American Academy of Arts and Sciences, and the American Philosophical Society. President Bill Clinton bestowed upon her the 1996 National Humanities Medal, and President Barack Obama presented her with the 2011 National Medal of Arts, making her the only poet who has received both medals. She served as a Chancellor of the Academy of American Poets from 2005 to 2011. In 2019, she received the Wallace Stevens Award, given annually by the Academy of American Poets to recognize outstanding and proven mastery in the art of poetry. She is Commonwealth Professor of English at the University of Virginia, where she has been teaching since 1989. Source

Party Dress for a First Born

Headless girl, so ill at ease on the bed,

I know, if you could, what you’re thinking of:

nothing. I used to think that, too,

whenever I sat down to a full plate

or unwittingly stepped on an ant.

When I ran to my mother, waiting radiant

as a cornstalk at the edge of the field,

nothing else mattered: the world stood still.

Tonight men stride like elegant scissors across the lawn

to the women arrayed there, petals waiting to loosen.

When I step out, disguised in your blushing skin,

they will nudge each other to get a peek

and I will smile, all the while wishing them dead.

Mother's calling. Stand up: it will be our secret.