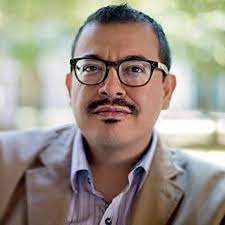 Eduardo C. Corral is the son of Mexican immigrants. Graywolf Press published his second book, Guillotine, in 2020. His first book, Slow Lightning, won the Yale Series of Younger Poets competition. His poems have appeared in Ambit, New England Review, The New Republic, Ploughshares, and Poetry. He's the recipient of residencies from the MacDowell Colony, Yaddo and Civitella Ranieri. He's also the recipient of a Whiting Writers' Award, a National Endowment for the Arts Fellowship, the Hodder Fellowship and the National Holmes Poetry Prize, both from Princeton University. He teaches in the MFA program in Creative Writing at North Carolina State University. He lives in Raleigh. Source

In Colorado My Father Scoured and Stacked Dishes

in a Tex-Mex restaurant. His co-workers,

unable to utter his name, renamed him Jalapeño.

If I ask for a goldfish, he spits a glob of phlegm

into a jar of water. The silver letters

on his black belt spell Sangrón. Once, borracho,

at dinner, he said: Jesus wasn’t a snowman.

into a car trunk, he was smuggled into the States.

Frijolero. Greaser. In Tucson he branded

cattle. He slept in a stable. The horse blankets

I’m an Illegal-American. Once, in a grove

of saguaro, at dusk, I slept next to him. I woke

with his thumb in my mouth. ¿No qué no

by listening to the radio. The first four words

he memorized: In God We Trust. The fifth:

Percolate. Again and again I borrow his clothes.

He calls me Scarecrow. In Oregon he picked apples.

to entertain his cuates, around a campfire,

a car trunk, he was smuggled into the States.

Greaser. Beaner. Once, borracho, at breakfast,

he said: The heart can only be broken

belt buckle: an águila perched on a nopal.

If he laughs out loud, his hands tremble.

wants to deport him. When I walk through

the desert, I wear his shirt. The gaze of the moon

stitches the buttons of his shirt to my skin.

The snake hisses. The snake is torn.