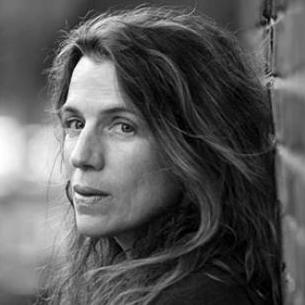 Sophie Cabot Black’s poems have appeared in The Atlantic, Bomb, The New Yorker, and Tin House, among other journals. Her three books from Graywolf Press are The Misunderstanding of Nature, which received the Norma Farber Book Award from the Poetry Society of America,  The Descent, which earned the Connecticut Book Award, and The Exchange. She has been awarded several fellowships, and appears at national literary festivals such as the Los Angeles Times Book Festival and the Dodge Poetry Festival.  Black has taught at the New School, Rutgers, and Columbia University, and continues to teach at the 92nd St Y and the Fine Arts Work Center in Provincetown. She holds degrees from Marlboro College and Columbia University.  She was born in New York City, the daughter of a Broadway producer and an opera producer, raised on a small farm in New England, and currently divides her time between New England, New York, and Colorado. Source

My friend is going through the fire on his knees,

His hands, crossing the entire field of it;

Once in a while he calls out, bewildered,

The other side unclear, wanting to just

Lie down and wait among the scattered stones.

Unimaginable heat: he pants, lost in the light

And he manages to make out one nurse

Up against the bright and it takes everything

To tell her what he needs, as if he had come upon

The one tree still standing, and understood

She promises nothing, who in her uniform

Was all that was ever asked for and who

Could hold him as he has never been held.