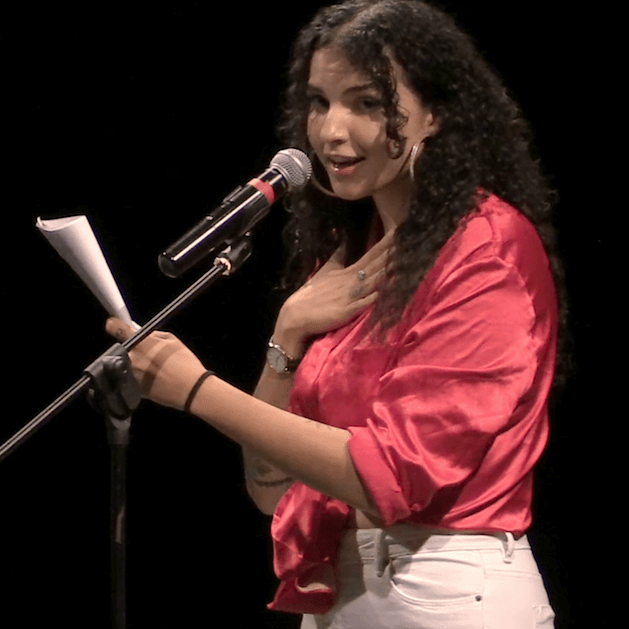 Angelica Maria Aguilera is an international touring Chicana poet and teaching artist. She comes from a mixed family of immigrants and uses spoken word to rewrite the narrative of what it means to be Mexican, woman, and American. Her work has appeared in publications such as Button Poetry, the Breakbeat Poets Anthology LatiNext among others. Aguilera is the author of "Dolorosa" on Pizza Pie Press and is working on her latest work "America As She" expected to be published in 2020. Source

Oh say can you see

Miguel was the last fourth grader to migrate

into my English as a second language course,

and is the first to raise his hand for every question.

But Miguel views letters in a different way than most.

Because there are a lot of words in Spanish

that do not exist in English,

he learns how to pack them in a suitcase and forget.

Because many phrases translate backwards

when crossing over from Spanish to English,

throughout the whole song,

he tends to say things in the wrong order.

So when I ask him to sing the second verse,

And the rocket's red glare

We watched our home

It gave proof to the night

that the flag was still theirs

They say music is deeply intertwined with how we remember.

Miguel hears the marimba and learns the word home,

hears his mother's accent being mocked and learns the words shame,

hears his mother's weeping and learns the word sacrifice.

He asks, what does the word America mean?

What does the word dream mean?

I say two words with the same meaning are what we call synonyms.

You could say America is a dream,

something we all feel silly for believing in.

He says, teach me.

Teach me how to say bandera.

Teach me how to say star.

Teach me how to hide my country behind the consonants

that do not get pronounced.

teach the letters to just flee from my lips like my parents,

and build a word out of nothing.

In my tongue, we do not pronounce the letter H.

Home is not a sound my voice knows how to make.

It's strange what our memories hold on to.

It's strange what makes it over the border

to the left side of the brain,

what our minds do not let us forget,

how an accent is just a mother tongue

that refuses to let her child go.

The language barrier is a 74 mile wall

lodged in the back of Miguel's throat,

the bodies of words so easily lost in the translation.

Oh, say for whom does that

Give back the land to the brave

and let us make a home for us free.