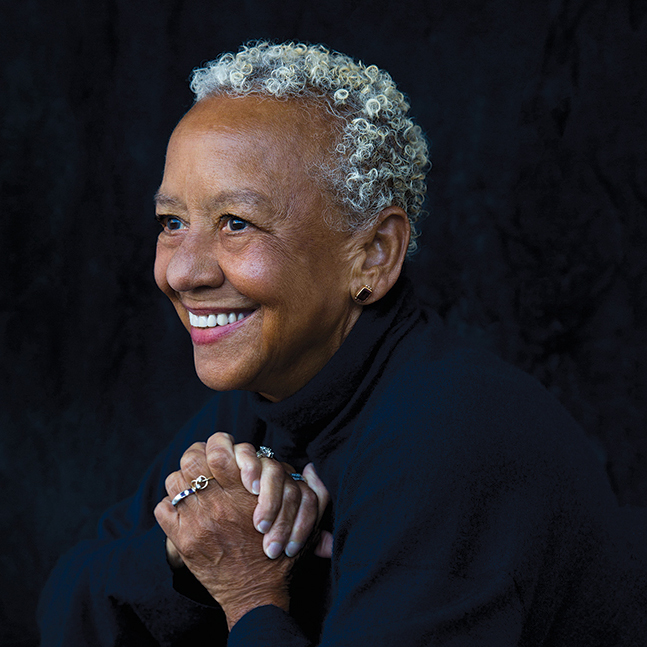 Yolanda Cornelia "Nikki" Giovanni was born in Knoxville, Tennessee, on June 7, 1943, and raised in Cincinnati, Ohio. In 1960, she entered Fisk University in Nashville, Tennessee, where she worked with the school's Writer's Workshop and edited the literary magazine. After receiving her bachelor of arts degree in 1967, she organized the Black Arts Festival in Cincinnati before entering graduate school at the University of Pennsylvania and Columbia University. Giovanni is the author of numerous children books and poetry collections, including Chasing Utopia: A Hybrid (William Morrow, 2013), Bicycles: Love Poems (William Morrow, 2009); Acolytes (HarperCollins, 2007); The Collected Poetry of Nikki Giovanni: 1968-1998 (Harper Perennial Modern Classics, 2003); Quilting the Black-Eyed Pea: Poems and Not-Quite Poems (William Morrow, 2002); Blues For All the Changes: New Poems (William Morrow, 1999); Love Poems (William Morrow, 1997); and Selected Poems of Nikki Giovanni (University Press of Mississippi, 1996). In her first two collections, Black Feeling, Black Talk (Harper Perennial, 1968) and Black Judgement (Broadside Press, 1969), Giovanni reflects on the African-American identity. A lung cancer survivor, Giovanni also contributed an introduction to the anthology Breaking the Silence: Inspirational Stories of Black Cancer Survivors (Hilton Publishing, 2005). Her honors include a fellowship from the National Endowment for the Arts in 1970, the Reverend Martin Luther King Jr. Award for Dedication and Commitment to Service in 2009, three NAACP Image Awards for Literature in 1998, the Langston Hughes award for Distinguished Contributions to Arts and Letters in 1996, as well as more than twenty honorary degrees from national colleges and universities. She has been given keys to more than a dozen cities, including New York, Los Angeles, Dallas, Miami, and New Orleans. Several magazines have named Giovanni Woman of the Year, including Essence, Mademoiselle, Ebony, and Ladies Home Journal. She was the first recipient of the Rosa Parks Woman of Courage Award. She has served as poetry judge for the National Book Awards and was a finalist for a Grammy Award in the category of Spoken Word. She is currently University Distinguished Professor at Virginia Tech, where she has taught since 1987. Source

I killed a spider

Not a murderous brown recluse

Nor even a black widow

And if the truth were told this

Was only a small

Who should have run

When I picked up the book

And she scared me

And I smashed her