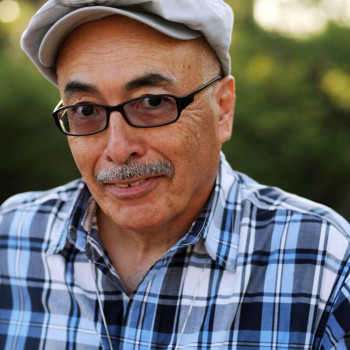 The son of migrant farm workers, Herrera was educated at UCLA and Stanford University, and he earned his MFA from the University of Iowa Writers’ Workshop. His numerous poetry collections include 187 Reasons Mexicanos Can’t Cross the Border: Undocuments 1971-2007, Half of the World in Light: New and Selected Poems (2008), and Border-Crosser with a Lamborghini Dream (1999). In addition to publishing more than a dozen collections of poetry, Herrera has written short stories, young adult novels, and children’s literature. His most recent works for young people include Imagine (2018) and Jabberwalking (2018). In 2015 he was named U.S. poet laureate. Herrera is also a performance artist and activist on behalf of migrant and indigenous communities and at-risk youth. His creative work often crosses genres, including poetry opera and dance theater. His children’s book, The Upside Down Boy (2000), was adapted into a musical. His books for children and young adults have won several awards, including Calling the Doves (2001), which won the Ezra Jack Keats Award, and Crashboomlove (1999), a novel-in-verse for young adults which won the Americas Award. His book Half The World in Light was a finalist for the National Book Critics Circle prize in 2009. Herrera has taught at California State University-Fresno and at the University of California-Riverside, and he currently serves on the Board of Chancellors of the Academy of American Poets. He lives in California. Source

who died in custody and for 8 yr old, Felipe Gómez Alonzo, also from Guatemala,

who died under custody of Customs and Border Protection on 12-24-18.

For all migrant and immigrant children, and their families separated on the road north.

why do you cry

those are not screams you hear across this cage

on the custody floor

where do I go where did they go

where do I go to breathe no more

a lost flame a firefly

where did she go

a short quotation or saying at the beginning of a book or chapter, intended to suggest its theme