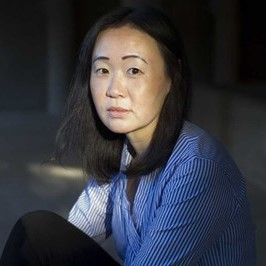 Poet Sandra Lim was born in Seoul, Korea, and grew up in California. She earned a BA from Stanford University, a PhD from the University of California Berkeley, and an MFA from the Iowa Writers’ Workshop. Lim is the author of the poetry collections Loveliest Grotesque (2006), which won a Kore Press First Book Award for Poetry, and The Wilderness (2014), winner of a Barnard Women Poets Prize.

Of her poetry’s sometimes oblique relationship to “more legible markers or narratives of … racial and ethnic background,” Lim has said, “poetry always alerts me to the solitariness of individual consciousness, to the mystery of other people with other subjectivities, and to the conditions and dilemmas of moving through private and public forms of life. Perhaps being a writer of Asian descent makes negotiating those public forms more vivid, to be sure. A challenge for every writer, I imagine, is to understand that real exploration involves real risk; it can be scary and exhilarating even to discover unexpected aspects of one’s own sensibility in writing a poem.”

Lim’s work has been anthologized in Gurlesque (2010), The Racial Imaginary (2015), and Among Margins: An Anthology on Aesthetics (2015). Her honors and awards include fellowships from the MacDowell Colony, the Vermont Studio Center, and the Getty Research Institute and a Pushcart Prize. She is an assistant professor of English at the University of Massachusetts Lowell. Source

The story has two endings.

It has one ending

Do you hear me?

I do not have the heart

to edit the other out.